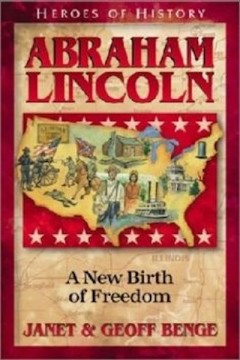 Benge Geoff et Janet
Actuellement indisponible Ajouter aux favoris
From the flag-draped presidential box, Abraham Lincoln watched the popular comedy on stage at the Ford theater. As he laughed at a funny line---Bang! A single shot rang out from a small derringer, the sound barely audible over the laughter of the crowd. Abe slumped forward, blood running from behind his left ear. When President Lincoln died the next morning, the United States mourned as it had never mourned before. An assassin had killed the man who had led Americans through the bloody turmoil of the Civil War with an unswerving commitment to rebuilding a strong and united country. Abe Lincoln had never set his sights on becoming president; after all, he'd grown up in a log cabin on the frontier and had hardly any formal schooling. But as the question of slavery threatened to destroy the United States, this self-taught lawyer with a sharp mind and passion for justice found himself at the center of the greatest debate the nation had ever faced (1809-1865).
Réf. L-HOF-AL
Éditeur : Ywam-Publishing
Nb de pages : 192