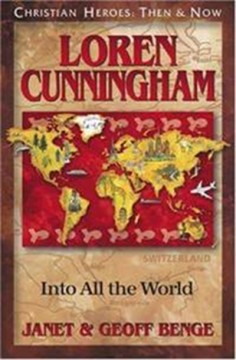 Loren Cunningham - Into all the world

Benge Geoff et Janet
2 en stock Ajouter aux favoris
Without warning, a huge map of the world appeared in Loren's mind's eye. Loren blinked, but the map was still there. Soon it was covered with ocean waves beating on every shore. Then the waves turned into the faces of young people flowing over every nation. Was Loren being given a glimpse of the future? If so, what part was he going to play? Ever since he was a young boy dreaming of writing "God Is Love" on the moon so that all the world's people could see it, Loren Cunningham has committed his life to reaching the whole world with the Good News of Jesus Christ, ministering in every nation on earth. Through his unswerving belief that nothing is impossible for God, Loren's vision of waves of young people became the reality if Youth With a Mission, unleashing young Christians in missionary service when that was unheard of. Today, through the mission he began, multiplied thousands of believers - young and old - are working together to bring the gospel to the whole earth. (1935-) This best-selling, missionary biography series - Christian Heroes: Then & Now - chronicles the exciting, challenging, and deeply touching true stories of ordinary men and women whose trust in God accomplished extraordinary exploits for His kingdom and glory.
Réf. L-BGHOF-LC
ISBN : 9781576581995
Éditeur : Ywam publishing
Nb de pages : 224